We had such a great discussion on Philippians during the worship gathering, that I decided to forego the discussion questions in this.

Where Did Paul Write His Epistle to the Philippians?

How do we know Paul was in Rome when he wrote Philippians? He never says he is in Rome. The dating of the letter is based on inference from internal evidence.

Discussing his work of the sharing the gospel in his location, Paul writes “it has become known throughout the whole imperial guard.” (1:13) The term he uses is praitōrion, the Greek transliteration of the Latin cohortes prætoriæ. This was a special military unit first formed as the bodyguards of the Scipio family in 275 BC but then later made into the imperial bodyguard by Caesar Augustus.

The praetorians were hand-picked by the emperor, served twelve year terms instead of the legionaries sixteen year conscription, and they were paid significantly more than the regular soldier. Under Nero, they were paid three and a half times what others were paid and received additional donativum or bonuses at significant points in the emperor’s reign.

Drawn from the legions, they were under the emperor’s direct command and operated outside of the legion system. Always conscious of maintaining the appearance of the Republic, Augustus had formed nine cohorts of 1,000 praetorians, but he was always careful to keep most of them outside of Rome although close enough for him to summon them if he needed them. These became known as the urban cohorts, and they were stationed around Augustus’s palace on the Palatine hill. They were deeply involved in the intrigues within the imperial family.

The core of the praetorians were billeted on the eastern side of the city in the Castra Prætoria, a fortress constructed during the reign of Tiberius. From there, they could move to control any kind of uprisings. The cohortes urbanæ, the three cohorts that were stationed inside the city, were closer to the Palatine and Capitoline hills at the Castra Urbanes. From there, they could be deployed quickly to protect the emperor. 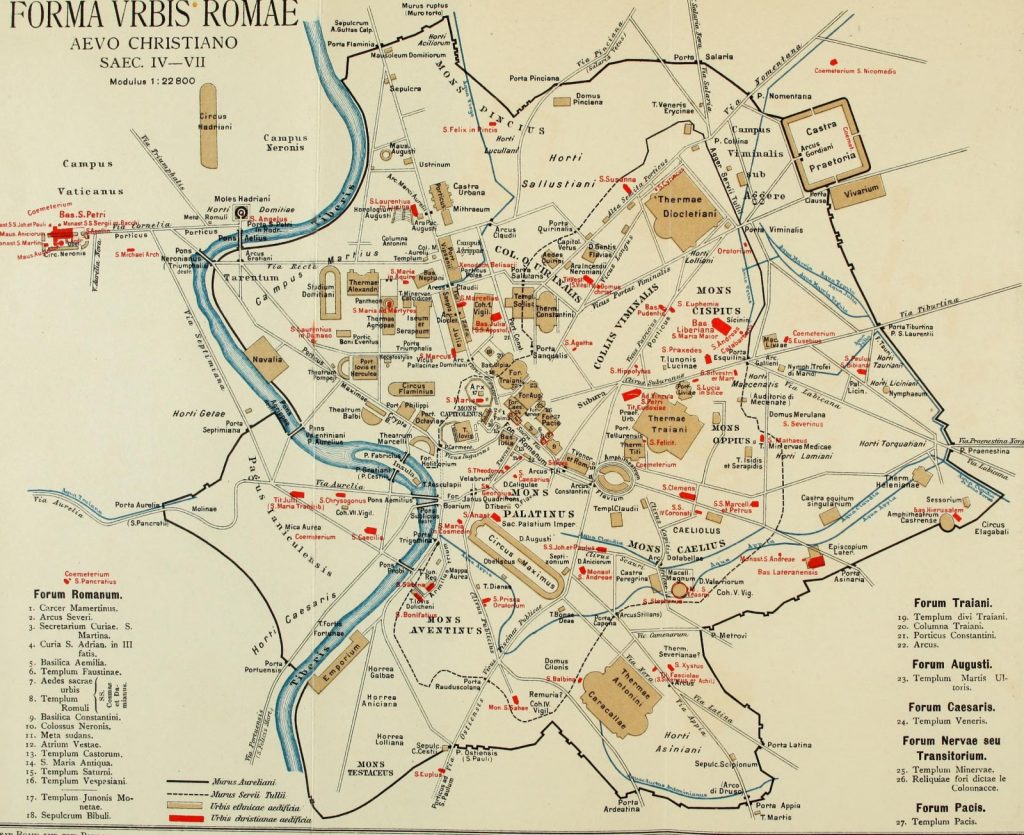 The praetorians served primarily as the emperor’s escort whenever he left his palace. When he was in residence, they formed the outer defensive perimeter of the palace. Inside the palace, he was protected even from the praetorians by the numerus batavorum or “German guard.” These men were mercenaries drawn from the edges of the empire and therefore impervious to the intrigues of other citizens.

When Paul mentions that the gospel was known “throughout the whole imperial guard” (ἐν ὅλῳ τῷ πραιτωρίῳ), he is undoubtedly describing his place of imprisonment. The main prison in Rome, the Cloaca Maxima(today called the Mamertine Prison) near the Capitoline hill, was reserved for those waiting execution. It seems unlikely that Paul would have initially been held here, since he had appealed to the emperor on a civil matter concerning Jewish rites.

Likewise, the quarries to the east of the Capitoline hill known was the Lautumiæ were reserved for slaves and the very poor. Paul was neither of these, and as a tradesman and an accepted Jewish rabbi, it seems more likely that he would not have been held there either.

The wealthiest of Roman citizens were placed under house arrest. Although Paul was not a resident of the city, he was apparently permitted to live on his own with only a light guard for two years (Ac 28:16, 30). There was a significant Jewish presence in the city of Rome during Nero’s reign, so it is not inconceivable that Paul took lodgings in the western side of the city called campus marius, near the Castra Urbanes, to await his appearance before Nero.

Finally, Paul sends greetings from Caesar’s household (οἱ ἐκ τῆς Καίσαρος οἰκίας). This is the most obvious evidence that he is writing from Rome. It is important to note that Paul does not necessarily mean Nero’s relatives. He is probably referring to the numerous administrators and bureaucrats who served the imperial office, many of whom were Hellenic Jews.

It was typical for people to refer to this group of administrators as a household because the household was still the basic economic unit. Paul’s ministry to both the praetorians and Caesar’s household shows a growing church in Rome, something Paul was concerned about in his letter to the young church there.