O king! Did you not sign an injunction, that anyone who makes petition to any god or man within thirty days except to you, O king, shall be cast into the den of lions? (Daniel 6:12)

It is one of the most familiar stories of the Old Testament. Daniel the Jew refuses to stop worshiping his God, and so the Persian king Darius is tricked into throwing him to the lions. When Daniel survives the night, it is a vindication of his God’s power.

But why was there a den of lions in the first place? Was this a common thing in Neo-Babylonia and the Median-Persian kingdom? Is there some historical or cultural significance to the presence of these lions in Babylon?

Of course there is.

The Lion in Hebrew Scriptures

The asiatic lion (Panthera leo leo) was one of the great predators of Southwest Asia during the biblical period. There are two Hebrew roots translated as lion:  ‘YR (ארי) and LB’ (לבא). They seem to be generally interchangeable, although they appear together idiomatically (Gen 49:9; Num 23:24, 24:9; 2 Sam 23:20; Ezk 19:2; Joel 1:6; Nah 2:11-12). Generally, it is assumed they denote the male and female, but this is not necessarily so. They are two etymologically distinct terms for the same or similar animals, just as English has with bird and fowl.

It is pretty clear that in the Hebrew mindset, a lion represented power and strength. Although they did not impute to the lion this sense of “King of the Jungle” that exists in modern Western thinking, there is little confusion as to the fear and respect they commanded.

The Lion in Persia

Daniel is among the last books of the Hebrew Scriptures, and it bridges the gap between the Hebrew culture and the Babylonian-Persian culture which dominated the Hebrews from the Exile (c. 600 BC) until the Hellenic period (c. 300 BC). Therefore, it is important to understand that the Persians viewed the lion through a similar but different lens. 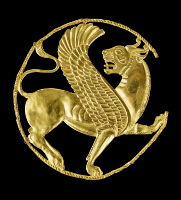 The Hebrews were semi-nomadic agrarians who herded sheep and goats in the hills of the Levant. The Persians, however, viewed the lion as deeply associated with royalty. The Achaemenid kings wore garments with lions woven into them. The kingdom was protected by winged lions known as shirdal.

The lion therefore has special significance to the Persians who, having recently conquered Babylon and were busily consolidating the previously Babylonian holdings into their satrapi system of government.

What there is no evidence of in the archaeological record is the concept of a Persian (or Babylonian) king keeping a lions’ den. The use of the term den or GV (גב) appears only here in Daniel 6, although it is related to a Semitic root for digging. The Septuagint translated it as λάκκος or “pond” which is really no help.

So, what was the lions’ den?

In no way does Daniel give us any indication that the term was being used metaphorically, although such usage has been discovered in other ancient documents. Reintrepreting this as anything other than an actual encounter between Daniel and real lions in an enclosed space of some kind is simply not possible without suspending the very literal nature of the narrative.

One of the great shows of might and right to rule was the hunting of lions; and this was a well-known practice of kings throughout the Near East. After conquering Persia, even Alexander the Great was depicted as hunting lions. Of course, these hunts were carefully arranged to ensure the king was safe. The lions uses for the hunts were not bred or kept; but they were captured and probably weakened in various ways by huntsmen. They could then be released into a large enclosed area, which the later Greek historian referred to as a paradeisos (παράδεισος, a transliteration of the Old Persian pairadaeza). Then the royal hunt was seen as a public spectacle. (Christopher Tuplin, Achaemenid Studies 1996, 101-102)

Perhaps, our interpretation of the den itself is too narrow. We might instead consider that this den was something more akin to a paradeisos – a large enclosed space used for hunting the lions. There would have been high walls, since lions can jump as far as 30 feet (not necessarily vertically); and since lions can reach speeds of over 50 MPH over short distances, it would have been quite large. This would account for the fact that Daniel had to be “taken up” out of the den (Dan 6:23) and that his accusers were then thrown down into the space.

And what does the story tell us?

If indeed Daniel was cast into a royal hunting enclosure and was able to survive without fighting the lions, this sends a very powerful message to the Persians. These earthly lions took the role of protector over Daniel. They were living embodiments of the shirdal, and therefore the lions themselves were messengers from a very powerful deity. This deity was the one who gave the lions to the kings as signs of their own power; and therefore this deity must be sovereign over kings.

This is why this story ends with a decree from Darius which speaks of a God who saved Daniel “from the hand (YD יד) of the lion.” (Dan 6:27) The lion’s power was to end the life of any unworthy king; but a worthy king was given the power to hunt the lion. A God who could therefore prevent the lion from doing anything to Daniel was a God who was worth worshipping.

Given that Daniel is written to Hebrews living under Achaemenid Persian rule, this is an important message. It reminds them that the king himself is subject to YHWH’s rule.