The Church of the Resurrection, part 7

At the dawn of the 20th century, a Church of the Resurrection had stood on the same site for nearly 1700 years. The building that presently occupied the site was an amalgamation of a Byzantine complex, Crusader additions, and contentious projects. The positions of the various factions inside the church had been established by a firman of 1853 and then codified into international law in the Treaty of Paris.

It is hard to understand today just how impoverished Jerusalem was under the Ottoman Turks. At the time of the 1853 firman, the city was home to less than 20,000 people. In his 1867 book Innocence Abroad, Mark Twain estimated the population at around 14,000 while the official 1851 census gave a much larger number of 25,000.

One thing was certain. The Ottomans had mismanaged the site. Everywhere, Jerusalem was falling apart. Atop of the Temple Mount, known now as the Haram al-Sharif or Sacred Place, the Dome of the Rome sat decaying on an all but abandoned overgrown platform. 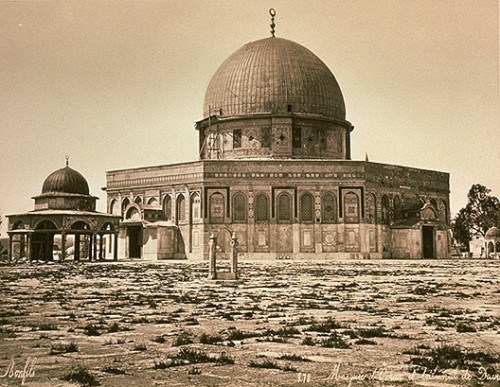 Although in slightly better condition, the Church of the Resurrection was also in a state of disrepair. The warring factions inside the Church and in the world at large had robbed the site of most of its external funding. 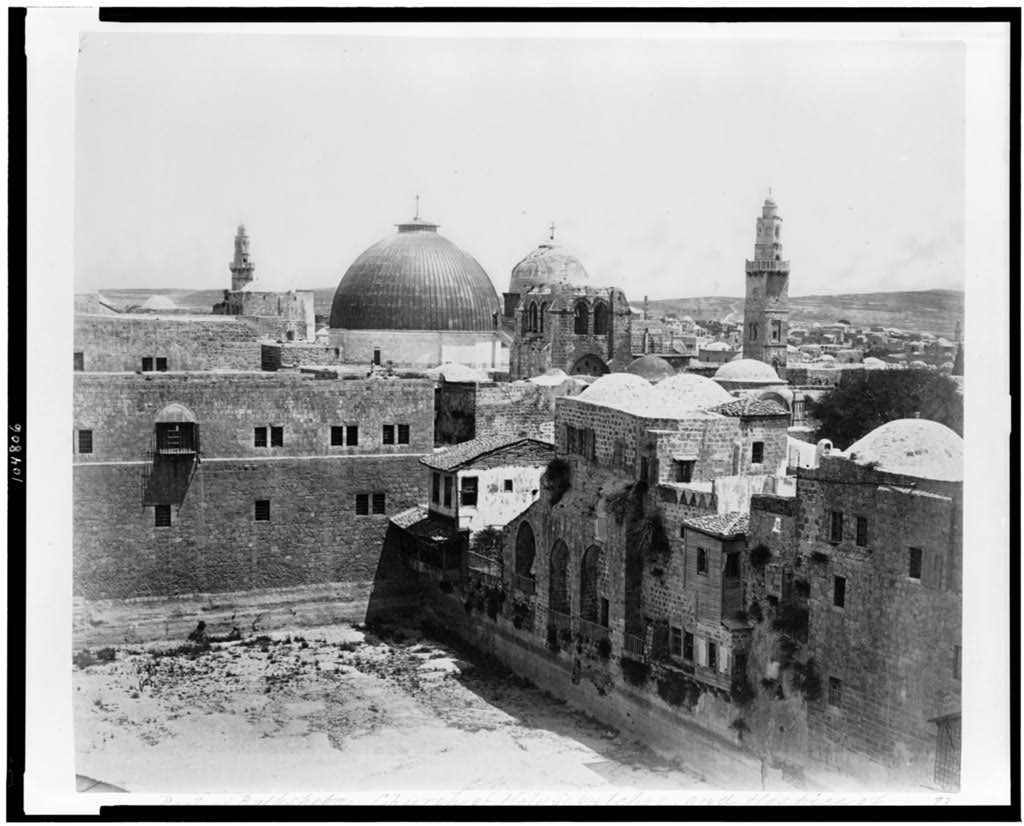 View of the Anastasis rotunda from the south. You can see the minaret of the Mosque of Umar to the right and the Crusader bell tower between the rotunda and the minaret.

The best thing that ever happened to Jerusalem was the decline of the Ottoman Turks in the 19th century. As their central government weakened (and you might remember that the English and French had to protect them from Russia in the Crimean War), the Ottomans released their strangle hold on Mediterranean traffic. As a result, it was much easier for travelers to get to Jerusalem  – a fact that brought people like Mark Twain there.

The weakened Turks had allowed various European powers to have diplomatic access to Jerusalem, and it was under these auspices that early archaeologists began to arrive and work in the city. Men like Edward Robinson and Charles William Wilson came to the city and began to uncover all kinds of interesting things.

Academic interests paralleled another movement that focused on Israel generally and Jerusalem specifically – Zionism. European Jews, constantly the targets of pogroms and unfair laws, began to migrate to Jerusalem. At first, it was a trickle but by the 1880’s, they outnumbered both Muslims and Christians in the city. After the Ottomans lost control of the city in the wake of World War I, the trickily became a stream.

In 1931, on the brink of World War II, there were 51,000 Jews living in Jerusalem, more than half of the population. Most lived outside of the Old City, as defined by Suleiman’s walls. They built a new city, known as West Jerusalem. When the Jewish state of Israel was declared in 1948, Jerusalem was declared the capital.

Then in 1967, the Jews took over the Old City. An Israeli flag flew from the top of the Dome of the Rock before the Israeli Knesset (Parliament) handed the Haram back to the Jordanians as a religious site. In 1980, the Israeli state officially annexed all of Eastern Jerusalem, but there is still no official international recognition.

What happened to the Church of the Resurrection while all of this was going on?

The 1853 firman had been meant to be a temporary measure, but with the long, slow decline of the Ottomans, the arrangements of the Church became something of a back drawer matter. The British and French secretly met and made arrangements for the division of the Ottoman territories, and in 1917 these lands were mandated to them by the League of Nations.

The various factions inside the Church petitioned the British Mandate to update the status quo. The Protestant British, unwilling to step into a religious matter that did not pertain to them, simply restated the 1853 firman. To deal with the situation, they established an Antiquities Department which would ensure the upkeep of the holy sites of all religions, but would not have executive authority.

Mark Twain visited the Church in the late 1860’s and told about his pilgrimage in a book The Innocents Abroad. He described the Church this way:

When one stands where the Saviour was crucified, he finds it all he can do to keep it strictly before his mind that Christ was not crucified in a Catholic Church. He must remind himself every now and then that the great event transpired in the open air, and not in a gloomy, candle-lighted cell in a little corner of a vast church, up-stairs
–a small cell all bejeweled and bespangled with flashy ornamentation, in execrable taste.

Twain uses the word gloomy half a dozen times in describing the interior of the Church, and he makes it plain that he does not approve of it in the slightest. Every inch of the building was covered with some kind of memorial or relic – including the tombs of both Adam and Melchizedek. To Twain, it is a sad commentary and a sad place. It is pretty apparent from his description that the church was relatively well-maintained, even if “in execrable taste.”

Sixty years later, the Church was in terrible condition. This is how one British pilgrim described the Church’s state in 1927:

The condition of the Church of the Holy Sepulchre is deplorable. Probably there is no church or cathedral of any importance in the whole world that is so hopelessly shabby. (Anonymous, “The Diary of a Pilgrimage”, Church Times, August 26, 1927)

Although still revered, the Church of the Resurrection simply did not get that much attention. The disrepair of the place was known around the world. It was quite literally falling apart. There were massive cracks everywhere. The ceilings were sooted and falling in. And then, things got worse.

In the afternoon of July 11 1927, an earthquake hit Palestine. A number of holy sites were severely damaged. The first people on the site of the Church of the Resurrection, however, could not find any reason to be concerned. Although many other places were piles of rubble, the only damage the Church seemed to have seen was the caving in of the smaller dome over the katholicon. A picture of Jerusalem after the 1927 earthquake.
The Dome of the Rock is in the background.

Various projects of renovation were presented, and in 1930 each faction inside the Church began work to repair the building. Unfortunately, they quickly discovered that the Church needed far more extensive and comprehensive repairs than any of them could handle. The delicate balance of the medieval arches required considerations beyond anything available to the people on site.

That balance, however, have been disturbed by eight centuries of progressive deterioration and the 1808 fire, not to mention twenty-three recorded earthquakes. No real consolidation or conservation had ever been carried out. Apart from the visual evidence, common sense dictated that the stability of the building was likely to be seriously compromised. (Raymond Cohen, Saving the Holy Sepulcher, p 41.)

In 1933, the great British architect and conservator William Harvey journeyed to Jerusalem to conduct a full survey of the site. His findings, published in 1935 by Oxford University Press, were beyond daunting.  On the first days of his survey, he informed the Antiquities Department that the entire structure was “structurally in imminent danger.”

Such was the in-fighting and squabbling of the various groups inside the Church that they refused to listen to Harvey even though stones were actually falling from the ceilings to smash to the ground in the midst of worshipers. The Greek Orthodox retained two experts who demonstrated the the satisfaction of the clerics that Harvey’s survey was inconclusive. The Franciscans brought in an Italian architect, Luigi Marangoni, who actively detested Harvey and simply refused to agree to any of Harvey’s reports. Whatever Harvey said, Marangoni attempted to refute.

At every turn, the conservation effort was thwarted and the Church continued to fall apart – literally, as the exterior walls slowly continued to lean outward under the weight of the roof.

Nothing would be done until 1965, thanks to a remarkable man named Vasileos Papadopoulos who, in 1957 became Patriarch of Jerusalem.

And his story will be next.