1. Acceptance of Ray Pouliot into the Elder Community

Ray Pouliot has been serving at Bedford Road as a transitional elder for two years. This was a provisional role created specifically for the circumstances by which the Holy Spirit brought him into our fellowship. At this time, we are presenting him for acceptance and affirmation as a full member of the elder community.

We have been very deliberate in the process of asking Ray to join us in the elder community. It is not Ray's desire to be a church leader, but it is what the Lord has called him and equipped him to do.  Even though we are “retired” we will forever serve our Lord and Savior Jesus Christ. He believes that part of this ministry and calling is to serve in the elder community here at Bedford Road at this time.  He has provided the following biographical sketch for your consideration. 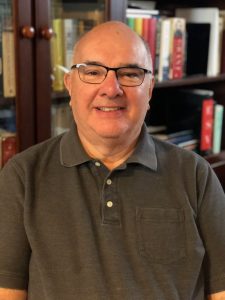 Ray was born in Manchester (1955) and attended 12 years of parochial schools. He is a graduate of Trinity High School 1973 and
attended UNH at Manchester and the NH Voc Tech College for Business Management and Building Maintenance Management. He married Carol Kos in 1975 and has four children (Jason, Amy, Joey, and Kristen) and eleven grandchildren.

Ray has served in various Christian ministries over the years:

Carol and Ray have hosted a weekly Bible study in their home for the past 30 years. Ray and Carol have been attending Bedford Road for the last 2 1/2 years. Carol, who is also retired from full-time work, is a care-taker for her mom, and grandchildren.

Ray owns Grace Property Management which keeps him busy managing the condo association for Riverside Business Park, and he also does maintenance projects for Copper Door and T-Bones restaurants.

Ray and Carol can also tell you a lot about Aruba, their favorite vacation location.   They have gone there every Fall for the past 20 years!

Greg Jones has served faithfully in our leadership community since 1999, first as a deacon and then as an elder. He has not taken a sabbatical from this role in the entire time. Nate Delisi has graciously accepted the invitation to rejoin the elder community in November 2020 so Greg can take some time off from serving in this capacity. Nate, or "Doc", has served in the leadership role before, as well as being a pastor and a missionary during his life. Over the summer, we will have opportunity for Doc to share more. This note is for the congregation's information.