Don't Be a Bible Know-It-All 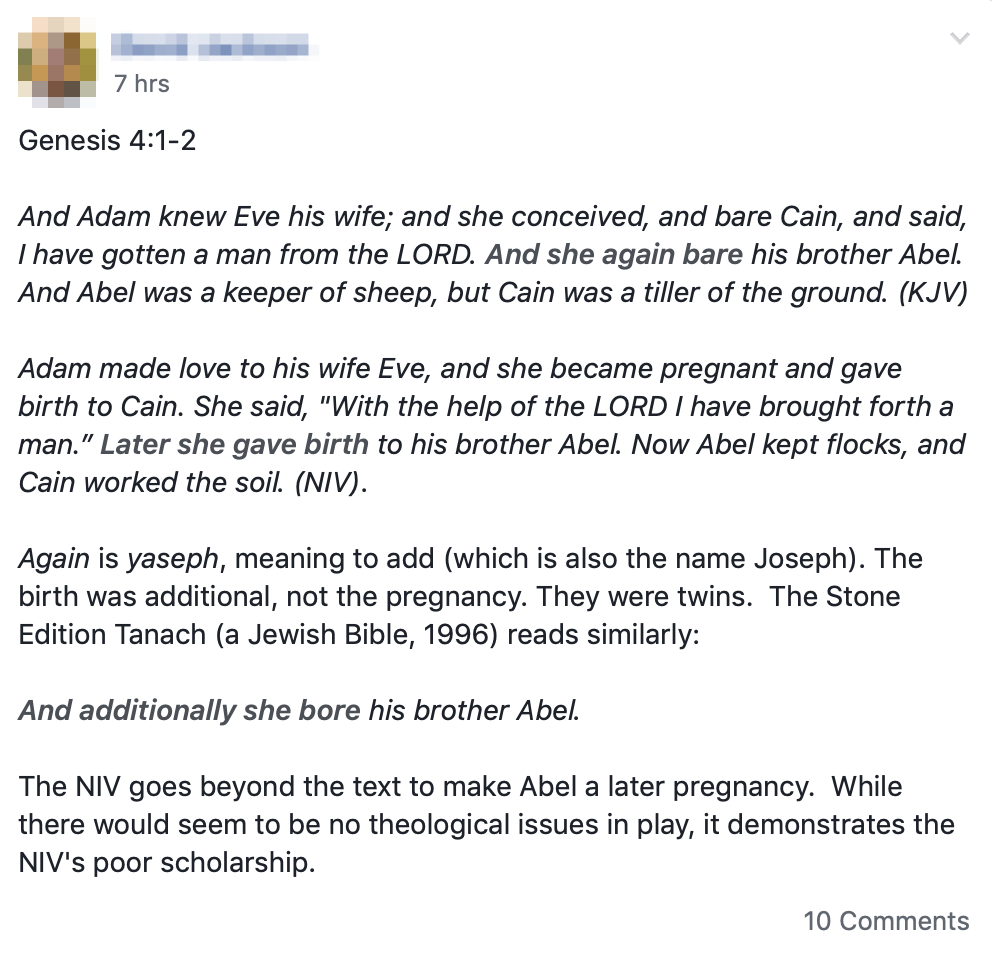 Recently, I saw someone post on Facebook about the Hebrew verb יסף (ysf). This is a pretty common word in the Hebrew Scriptures. It is the root of the name Joseph (יוסף), but as a verb it appears over 200 times.

This particular Bible Know-It-All argued that a particular English translation intentionally violates the text of Scripture by rendering יסף as “later” instead of “again” in Genesis 4:2.  He proceeded to argue that this is an incorrect translation because, and I quote, “They [Cain and Abel] were twins.”

In the comments, several others I know took the poster to task for his criticism of the translation, rightly pointing out that the translation does not alter anything that is not already only vaguely hinted at. They are happily arguing about translation theory and all that. But the translation itself is not my focus here.

Our Know-It-All has decided he knows what is really in Genesis 4:1. This is really the issue, not that he is criticizing a particular translation but the reason why. What bothers me about the Bible Know-It-All’s approach is that he is committing a cardinal error in biblical exegesis. He is allowing interpretation to dictate translation; and he is doing this because he wants to bring an obscure interpretation to the forefront of the text. (This is not the first time he has done this kind of thing.)

A Brief Survey of the Know-It-All’s Theory

The issue with this argument is that it is an oversimplification. When twins are born to parents, another chronological marker – אחר (‘hr) – is used to introduce the sequence of birth. (Gen 25:24-28, 38:28-30) These births are announced with a particular idiom meaning “twins were in her womb” – הנה תומם בבסנה (hanah tomim bevisenah). The absence of this idiom cannot be ignored.

Also, יסף appears in the telling of the births of children who could not possibly be twins (Gen 38:5). In fact, יסף is often used to describe events which are not sequential (Gen 44:23, Lev 5:16, Nu 22:15). The overwhelming usage of יסף is a repeated action, not a sequential one.

Not only is there no syntactic or textual evidence that Cain and Abel were twins, the arguments that involve their births in the rabbinical literature are wild, to say the least. One peculiar interpretation has Cain being conceived by the demon Sammael, and it is only when the two boys are born that Adam sees his clearly angelic form and realizes Eve has been unfaithful. This theory was later picked up by the hyperfundamentalist preacher Peter Ruckman, who dropped the idea of Sammael and had Cain conceived by Satan himself.

As medieval interpretations progressed, there developed a theory that Cain and Abel were not twins but they both had twin sisters. These sisters were born so that Cain and Abel would have someone to marry. The two traditions then get kind of intermixed in the rabbinical literature. It is all very confusing. 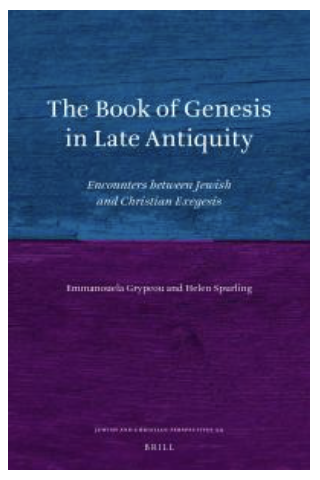 (For a more in-depth look at this, I commend you to Emmanouela Grypeou and Helen Spurling’s 2013 book, The Book of Genesis in Late Antiquity: Encounters Between Jewish and Christian Exegesis.)

My point is that this idea of Cain and Abel being twins is purely conjectural. It is a bizarre way of handling certain cruces in the text, and certainly it is far from clearly stated in the Scriptures. To then use your own personal view of the issue as a litmis test for what is and is not an acceptable translation of the text is an exegetical blunder.

Avoid Being a Know-It-All

As someone with a lot of experience interpreting the Scriptures and studying them in both linguistic and historical context, I can tell you that it is very easy to become a Know-It-All, to latch onto some obscure idea because it resonates with you and then let that idea guide your interpretation of everything. We live in a world with instant access to a lot of research and theories. But the quality of that quantity is questionable!

A Know-It-All will decide he has discovered the secret sauce to biblical interpretation and begin imposing his theories and ideas on the text, disregarding tradition and logic in favor of a personal ideology. These people are well-intentioned, but they are dangerous.

Avoid being a Bible Know-It-all utilizing the following techniques:

Often, you discover that the best interpretation of Scripture is not the obscure recently discovered ideas but the ones that when you find them, you join a chorus of other believers who have also observed it. After all, the Scriptures do not exist for us to be Know-It-All’s. They exist for us to celebrate Christ together.