A Little Bit About Galilee

Sunday, I taught the latter half of Luke 4. After Jesus leaves his hometown of Nazareth, he travels to the town of Capernaum where he casts out the spirit of a defiling demon, heals a fever and spends an evening healing people before heading south toward Judea.

All of these place names can get very confusing if you’re not used to dealing with the space of Roman Israel, and one of our members asked if we could put up a map of the region while I was teaching. I thought I would do one better and provide not only a map but a little bit of background to help understand Jesus’ primary areas of ministry.

Jesus spent most of his time in what is known today as the West Bank. During his day, this region was divided into three toparchies: Galilee, Samaria, and Judea. Each was a distinct ethnic region, populated by people who considered themselves distinct from the other two, which is why Jesus is called a Galilean instead of a Jew. Usually, when the New Testament speaks of Jews, it is speaking of those who lived in Judea, from which the word is derived. (Of course, it is nearly impossible to refer to the followers of Judaism outside of Judea as anything but Jews today, so we are sort of stuck with the anachronistic term.)

Most of Luke’s narrative takes place in Galilee, so that’s where we will focus.

Galilee is the region around the Lake Genesaret (the Sea of Galilee), the largest body of freshwater in Israel. It is bordered by Syria to the north, Mt. Carmel and the Mediterranean to the west and the Jezreel Valley (Megiddo) to the south. To the east and southeast was a region called Decapolis (ten cities), which was sparsely populated. To give a sense of scale, the trip from Capernaum to Jerusalem is about 100 miles. 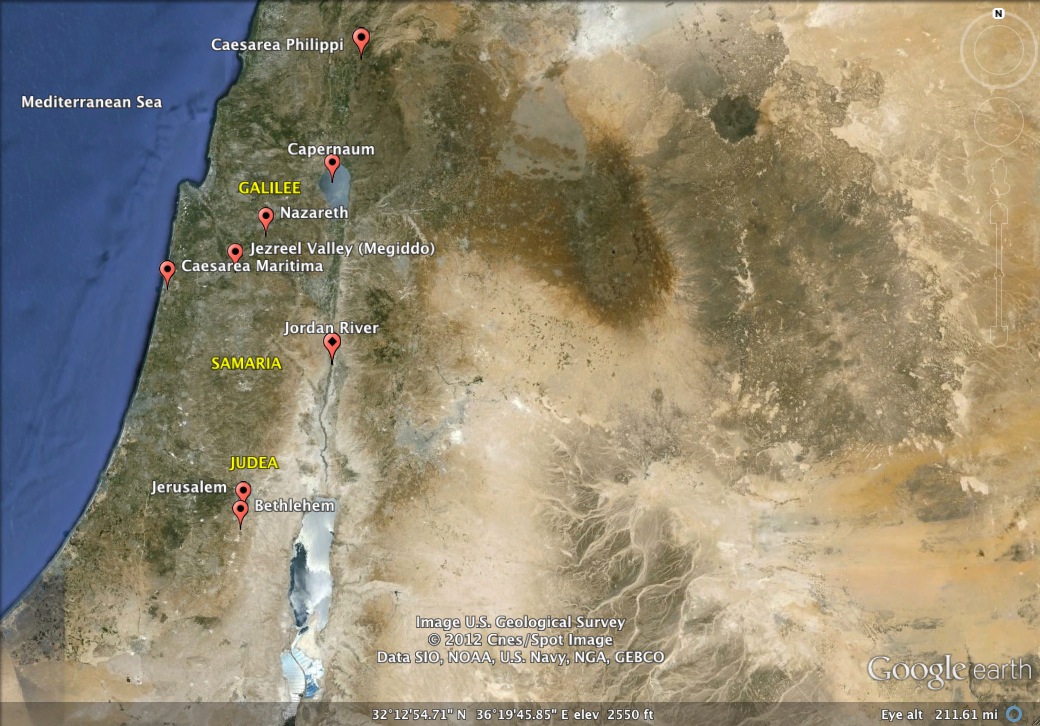 Because Galilee sits to the north of the Jezreel Valley, it is not part of the historical land of Israel. According to 1 Kings, Solomon gave the land to Hiram, king of Tyre. The very name Galilee comes from the Hebrew term for region or district. In Isaiah 9, the area is called Galilee of the Gentiles – literally “the region of the foreigners.”

The Romans gave jurisdiction over the region to Herod the Great, and upon his death in 4 BCE, rule passed to his son Herod Antipater as ethnarch (“prince of the people”) of Galilee. Before Herod took over, the people of the region practiced Judaism, but it was not quite the rabbinical Judaism of Jerusalem. Herod subjugated the population and “converted” them to the rabbinical form of Judaism. This happened only briefly before Jesus’ time.

In 20 CE H. Antipater constructed his capital on the southern shores of Genesaret. He dubbed his capital city “Tiberias” in honor of the reigning Caesar. This marked a change in Galilee’s fortunes, shifting the capital away for Sepphoris, a city near Nazareth. At the time of Jesus’ ministry, Galilee was what we might call an “emerging market.” In just a few decades, it had gone from something of a backwater to a center of fishing industry as well as doing a fair business in tourism.

When Jesus was in Galilee, he spent most of his time in and around a town on the northern shore of Genesaret, called Capernaum. This was a mid-sized town of a couple thousand people at the time, and it appears to have been populated mostly by Jews although Antipater’s construction projects had probably brought an influx of Gentiles.

Capernaum was not a major town in the region, but it was not negligible either. Most scholars estimate that the population of the region was around 350,000 at Jesus’ time, but even that might be a little bit high. It depends what you consider Galilee, but I digress.

Anyway, that’s just some background for you.